A few months ago I gave a presentation where I shared best practices for recruiting and engaging with COVID-19 survivors on social media platforms. The audience said they found the topic helpful so I decided to turn the main points from the presentation into a post here.

There are two very important reasons why a researcher should learn how to engage with patients online. First, recruiting research subjects from online health communities enables precision recruitment. There are online health communities for very specific subgroups of patients, such as “mothers with diabetes” or “parents of children with long covid.” While many of us were trained to advertise our studies to help patients find us, I’ve found I can recruit many more participants by finding the places they spend time in online and going to them.

Secondly, engaging with online health communities is an excellent way to learn what patients really care about and need. When I analyzed questions posted by women just diagnosed with breast cancer, I learned that the most common question these women had was how to avoid chemotherapy. Many of these women were seriously considering skipping chemotherapy, but were much more comfortable having this conversation with breast cancer survivors than their doctors. If we want to understand what factors most impact patients’ decisions about their health, we need to connect with patients outside of clinics.

However, it’s also important to acknowledge the potential risks of interacting with patients outside of a typical medical setting. We need to make sure that patients understand why we’re talking to them and how we will use the information we learn. It’s very important that researchers’ messages are never interpretable as medical advice. Most importantly, engaging with patients online must be done professionally and authentically. I’ve designed communication strategies for engaging with online groups for over 14 years, my PhD is in Communication, and yet it’s still essential for me to keeping learning about how engage others in new platforms as they come out. You have to spend a lot of time observing and learning in an online space to find the right formula for being both authentic and professional. Effective communication in the most popular online spaces like TicToc requires an understanding of trends, subculture, and memes. The future of engaging with patients requires that some medical professionals to learn how to immerse themselves in the patients’ world in order to gain a better understanding of their worldview.

To begin developing that skill, let’s start with some basic best practices (BPs) for engaging with online health communities. The engagement techniques you use will vary by community, but here is a list of BPs that will get you started. I’ve pulled these directly from my PowerPoint slides where OC stands for “online community.”

I’m a member of the COVID-19 Research Collaborative (C-19RC), and I wanted to share the link to our website so anyone interested in participating in long covid research knows where to go to hear about our latest studies. You can find us at: www.c19rc.com .

We’re focusing on understanding the timing of long covid symptoms, the health impacts of long covid, symptom clusters, and the predictors of long covid. I’ll link to some of our preprints below. If you’re interested in collaborating with us please reach out to me at nalamb@iu.edu .

COVID Symptoms, Symptom Clusters, and Predictors for Becoming a Long-Hauler: Looking for Clarity in the Haze of the Pandemic When I was in grad school studying health and behavior change, most of the research papers we read used models that measured people’s attitudes, beliefs, and behavioral intentions in order to try predict why some people do a behavior and others do not. However, in my research I’ve found that the attitudes people share during a survey or interview are often very different than those they share with other patients in online spaces. For example, if you ask someone in a survey what they find difficult about exercising regularly they may say that they don’t have time or they don’t like to exercise. Those are certainly very valid barriers to exercising, especially for people who have little time outside of work and caring for their families. However, my research has found that there is another, deeper layer of health beliefs that really matter. Sometimes,  people’s personal definitions or “mental models” for a health behavior like exercise have a huge impact on whether they believe they can ever add that healthy behavior to their routine.

Mental models are fascinating – they are the constellation of thoughts and feelings we have associated with an idea. It’s the other thoughts and beliefs that come to mind when we think about something, and one person’s mental model for an idea can be very different from someone else’s. As well-known systems theorist Dr. Peter Senge said, “Mental models are deeply held internal images of how the world works…” 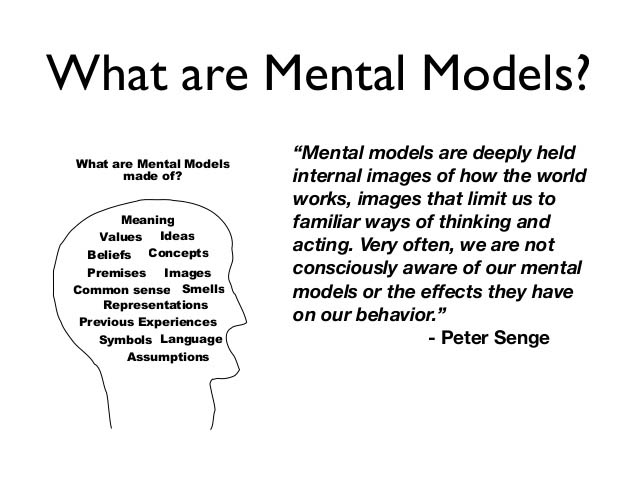 So when I think of a concept like “work” I may think of data and algorithms and remember an upcoming deadline, someone else might think of dealing with angry customers, feeling worried about being exposed to covid, and the fact that their back hurts from restocking shelves. Differences in our mental models for the same concept can be a prime source of differences in what people value and how we see the world.

My analysis of health narratives about individuals’ struggle to exercise found that understanding mental models of exercise is essential for encouraging healthier activity levels. It turns out that the many of the people in my study had a mental model for exercise that involved rigorous, advanced aerobic exercise similar to what you’d see in a 1980s exercise video (many people mentioned ’80s exercise videos specifically). Many members with this mental model were obese, and they believed that this advanced level of physical activity was outside of their ability, and so they felt little efficacy for being able to “exercise.”

Now that we know more about some of the perceived barriers to starting exercise, how do we find those pivot points, attitudes and beliefs that are most ready for change? Luckily for both patients and researchers there is an amazing phenomenon in online health communities where members who have successfully changed to healthier behaviors share how they did it. I collect those success stories and they become data points I can use to find patterns of successful behavior change. In one post, a member explained to others that she had to reframe her definition of exercise in order to get started by thinking of exercise as ANY type of activity that got her up and moving. She said she was successful by starting small, walking just 10 minutes per day and then increasing that time by 5 minutes every day until she was going for hour long walks. Another important mental reframing frequently recommended by those who successfully begun to exercise was to keep trying different types of exercise until you find one you like. One person described how he hated doing anything outside and didn’t have anywhere close by to go for walks. However, he was surprised to find that he loved lifting weights, and was actually quite good at it for a beginner.

Seeing how motivated people are to try new health behaviors after learning from people like them online makes me believe that analyzing success stories is a great way to identify pivots that can help people develop psychological flexibility. Successful behavior change narratives can point to perspectives and mental resources that are helpful for making specific behavior changes.

To give you one more example, I did some research in one online community whose members were trying to eat healthier in order to manage their type 2 diabetes. New community members often asked the group “how they did it” – how they totally changed their diet and lost weight to get their blood sugar numbers down. Before and after photos were very popular, and people who lost weight were happy to share their strategies for success. I analyzed hundreds of success stories and there were three common themes:

These tips may seem un-astounding to some, but when you’re trying to change the way you live your life and feel stuck, really practical, actionable advice like this from people who understand what you’re going through is golden. There is so much to learn from patients that medical professionals can use to help motivate their patients, and this area of research is starting to explode in industry. All of this motivates me to continue researching in this area!

And I can’t end this post without linking to an 80s exercise video. The people who shared their mental models were so right, I can’t imagine starting to exercise at this level!